It is allowed to provide agricultural land for secondary lease to legal entities and individuals, and the right to freely sell agricultural products grown in subsidiary farms is guaranteed. Special resolutions of the Decree of the Republic of Uzbekistan (No. PP-4633 and No. PP-4634 of March 6, 2020) abolished the practice of producing raw cotton, cereals on the basis of the state order and the establishment by the state of purchase prices for them.

Reforms have been carried out to improve public administration in the field of agriculture. The Ministry of Agriculture of the Republic of Uzbekistan is entrusted with the tasks of monitoring agricultural lands and crops, placing crops, exercising state supervision over the protection of agricultural land, accelerating the development of the food industry of the republic and fully providing the population with high-quality food products.

A number of documents and procedures for the development and reuse of agricultural land were developed. The "Concept for the effective use of land and water resources in agriculture" was confirmed, which provides for the phased re-introduction into use of 1.1 million hectares of land previously eliminated from agricultural circulation in 2020-2030. It is also planned to develop rainfed and pasture lands with groundwater reserves through the widespread introduction of resource-saving technologies. 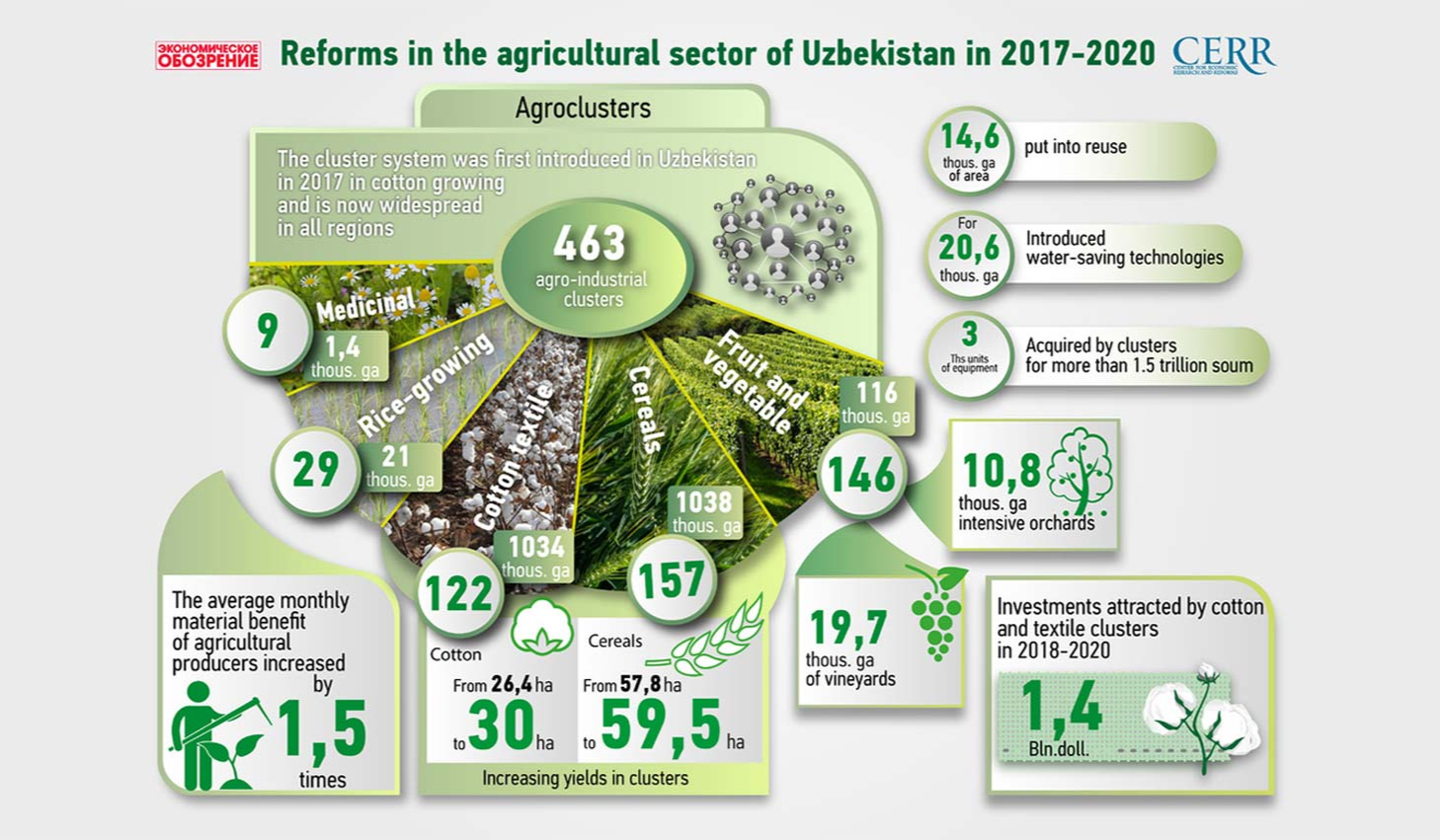 Pilot and commercial projects have been implemented in cooperation with foreign partners on the digitalization of the agricultural sector in the regions. In particular, data on crops were posted on a digital platform in terms of cotton and grain fields of Kashkadarya and Andijan regions in 2020, Syrdarya and Bukhara regions in 2021.

A project was launched on online monitoring of more than 225.5 hectares of areas of the Bukhara region, as well as an information system for registering and monitoring the provision of mechanization services in real time, covering more than 3500 units of agricultural machinery with installed GPS equipment.

An information system for monitoring the use of water resources at irrigation facilities has been developed. In addition, more than 200 Smart Water installations have been introduced and the system is being monitored.

The strategy for the development of agricultural technologies was approved and the state institution "Center for Digitalization of the Agro-Industrial Complex" under the Ministry of Agriculture of the Russian Union was created.

Work is underway to create 8 more modern large agrologistic complexes, with a capacity of 1.6 million tons, with the involvement of ADB, WB and the French company Rungis Semmaris. 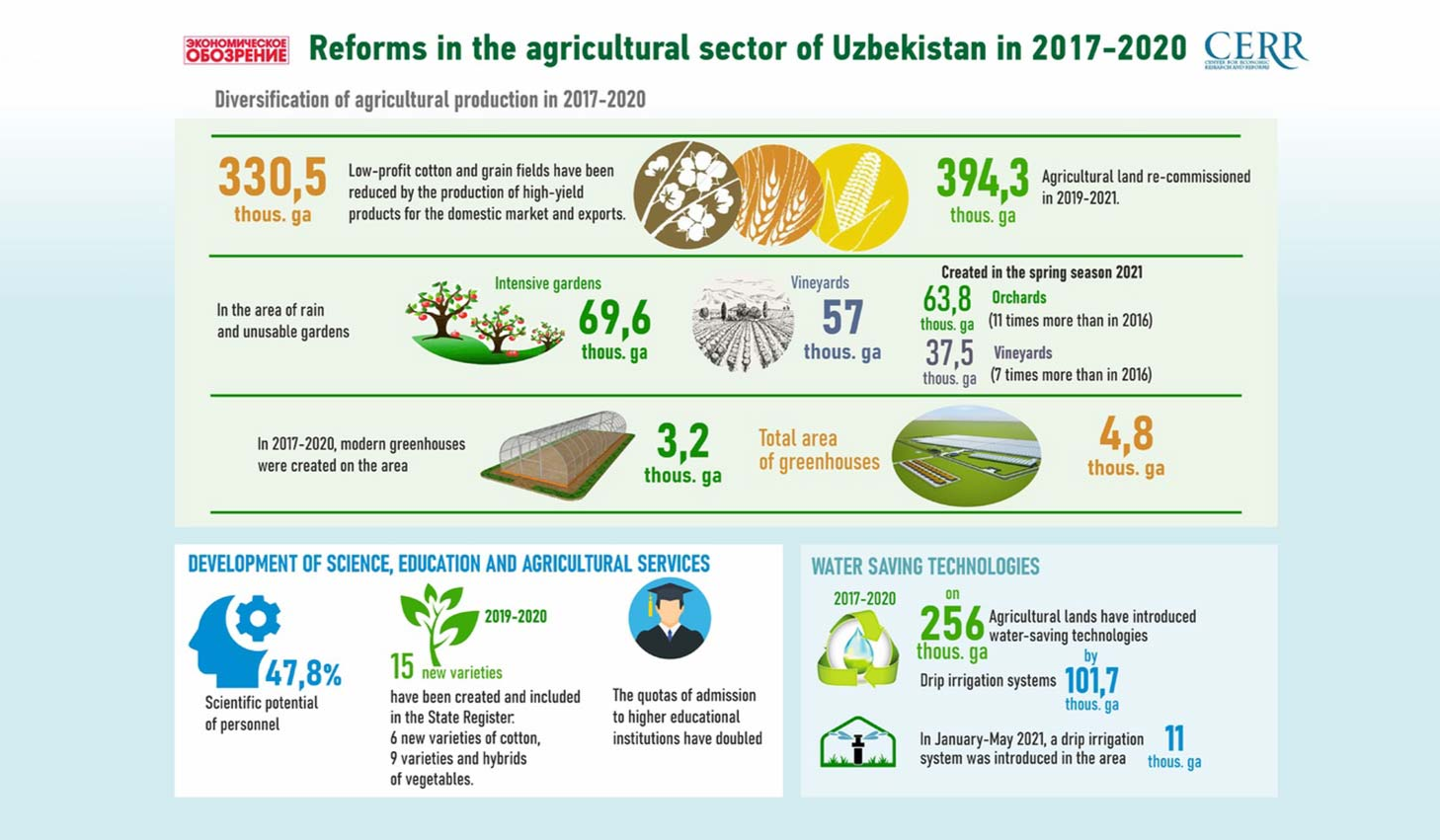 In order to develop science and innovation, the Research Institute of Plant Genetic Resources was established, as well as the activities of the National Genbank for Genetic Resources of Agricultural Crops. As a result of scientific research in 2019-2020, 15 new varieties (3 times more) were created and included in the State Register, in particular, 6 new varieties of cotton, 9 varieties and hybrids of vegetables. For comparison: in 2016, only 5 new varieties of crops were created. In 2017-2018, a total of 128 patents were obtained.

This year, the National Center for Knowledge and Innovation in Agriculture and the first Center for Knowledge, Innovation, Consultation and Agricultural Services (ACIS) were established in the Tashkent region. In the future, such centers will be created in all regions of the Republic, where more than 100 types of agricultural services will be provided and international quality and certification standards will be introduced on the basis of the principle "from field to consumer".

During 2020-2021, 39 internationally recognized Global G.A.P. standards were implemented, as well as 4 Organic standard, 226 international standards ISO 22000 (HACCP) and 257 other standards for 526 farms and enterprises grouped as a result of the cooperative approach.

Exports of fruit and vegetable products has been established to 24 new, highly solvent countries such as Norway, Sweden, Switzerland, Cyprus, Great Britain, Luxembourg, Australia, Kuwait, Aman, etc. In particular, despite the conditions of the pandemic in 2020, 1.5 billion tons (187%) of agricultural products worth more than $ 1 billion were exported (2 times more than in 2016).

Foreign partners are exploring the possibilities of producing biopolymers in Uzbekistan

The U.S. recognizes the results of Uzbekistan Presidential Election

President of Uzbekistan calls for further expansion of multifaceted cooperation within the...